The Korea HeraldMusic of Yun I-sang and works by Japanese contemporary classical music composer Toshio Hosokawa are among the highlights at next year's Tongyeong International Music Festival, March 29-April 7, taking place at the southern port city of Tongyeong in ...

This year's annual Tongyeong International Music Festival opened its curtains Friday, celebrating its new theme, "Sounds of Tomorrow" with a performance by Korea's first female-led orchestra. Looking to showcase a mix of classic and modern compositions that are rarely heard nowadays, TIMF is holding performances daily until Thursday at the Tongyeong Concert Hall in Tongyeong, South Gyeongsang Province. 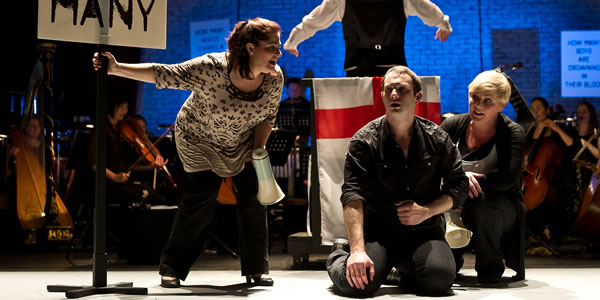 Music Theatre Wales goes international ! Britain's most adventurous smaller opera company presents two productions, on the same day on opposite sides of the world. On April 2nd, Philip Glass The Trial opens at Theater Madgeberg, Germany, while Mark Anthony Turnage's Greek opens at the 2015 Tongyeong International Music Festival, South Korea Both pieces are classic MTW Glass wrote The Trial (reviewed here) specially for the company, who have championed his work almost since the company started more than 25 years ago, including outstanding productions like In the Penal Colony (reviewed here) Turnage's Greek is also a MTW classic. Greek was shocking in 1988/9 because it was a primal scream of protest. Although it's set in the East End of London, it's based on Oedipus, a drama so univerrsal that it's inspired many retellings. Korea should have no problems connecting. Two productions 5000 miles […]